Across the Threshold of India: Art, Women, and Culture.

by Martha A. Strawn
with introductions by Kapila Vatsyayan and Mark H. Sloan, an historical essay by William K. Mahony, and drawings by Jack Colling

An important and strikingly beautiful book about the sacred Hindu practice of threshold drawing!

In the Hindu world-view, threshold is a profoundly important concept that represents a passage between one space and place and another, creating a visual bridge between the secular and the sacred. Accordingly, the literal threshold a person crosses when entering and exiting a home or business symbolizes the threshold one crosses between the physical and spiritual realms of existence. Hindus have long believed it is possible to affect a person’s well-being by using diagrams to sanctify the “threshold space.” The diagrams do so by “trapping” ill will, evil, bad luck, or negative energy within their colorful and elaborate configurations, thereby cleansing those who traverse the space and sending them on their way with renewed spirit, positive energy, and good luck and fortune.

The creation of the threshold diagrams is steeped in Indian history and culture going back thousands of years. Practiced by women, it was long considered a vernacular art. But, as this pioneering book reveals, the diagrams represent highly sophisticated mathematical and cosmological underpinnings that have been handed down from one generation of women to the next. As India has modernized and rapidly become more urban, however, more Indian women have acquired more complicated lives, allowing less time to continue the practice of threshold drawing and relying, increasingly, on homogenized pattern books. And so a longstanding and critically important expression of Indian life, religion, and culture is becoming less common to the point the tradition is threatened.

Across the THRESHOLD of India reveals, the story of the threshold drawings for the first time, history of how the threshold drawings evolved, what they have meant and represent in Indian and Hindu culture, and how the practice became a high form of vernacular art for religious and everyday life. By combining her unforgettable photographs—most of which are in the permanent collection of the Indira Gandhi National Centre for the Arts, the nation’s foremost research center for Indian culture and art—with the most recent scholarship on the history and art of the threshold drawings, Martha A. Strawn has given the world a unique and enduring gift. Her book is a work of visual ecology that perceptively portrays one of India’s and the world’s longest and least-known religious practices—the art of sanctifying space through the creation of threshold diagrams.

By presenting the most recent scholarship on the history and art of the threshold drawings and combining that engaging tale with her wonderful fine-art and documentary photographs, Martha Strawn has given the world a unique and enduring gift: a work of visual ecology that perceptively portrays one of India’s and the world’s longest and least-known religious practices: the art of sanctifying space through threshold drawings. 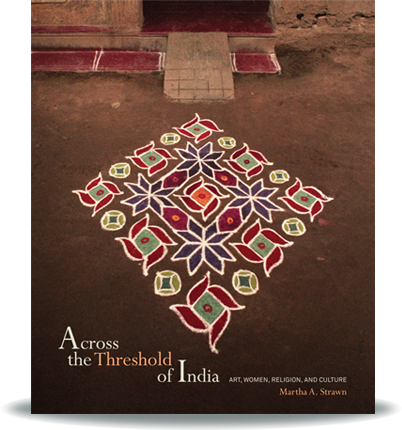