Religion: From Place to Placelessness.

What does it mean to be religious in the modern world? This is the question posed by well-known human geographer, Yi-Fu Tuan in Religion: From Place to Placelessness. In this, the latest book in his long and distinguished career, Tuan turns to this specific challenge, which has been a uniting current in much of his previous work. To illustrate the modern meaning of religion, Tuan calls on the work of photographer-artist Martha A. Strawn, whose impressive gallery of photographs from around the world concludes the book.

Religion, Tuan argues, is a perennial quest for safety, certainty, and spiritual elevation that began oriented in place and particular cultural practices; but, in its highest reaches, religion moves toward universalism and placelessness. Drawing examples from both Christian and Buddhist traditions, Tuan explores, with his characteristic grace, sensitivity, and insight, the ultimate placelessness of religious experience. Tuan’s meditations combine with the elegance of Strawn’s photographs and essays to create a book that is both thought-provoking and quietly beautiful. 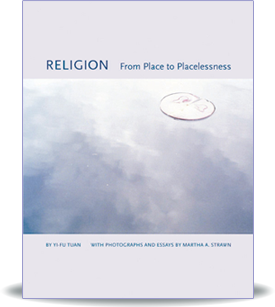